The cloud cover that slightly threatened the Royals game dissipates, giving way to bright morning sunshine. We have a (relatively) brief easterly jaunt ahead of us: 3.5 hours of I-70, the tour of Missouri’s mid-section.

We lunch on the eastern side of Columbia. The hotel Mitch selected is a few minutes walk to the train that’ll take us to the new Busch Stadium. No parking or traffic hassles. No parking fees. Just an affordable round trip train ticket. Mitch’s impeccable planning once again promotes convenience and frugality!

During our walk we pass Tom’s Bar & Grill on South Euclid, making a mental note for post-game beverages. The train ride proves much shorter than I anticipate. 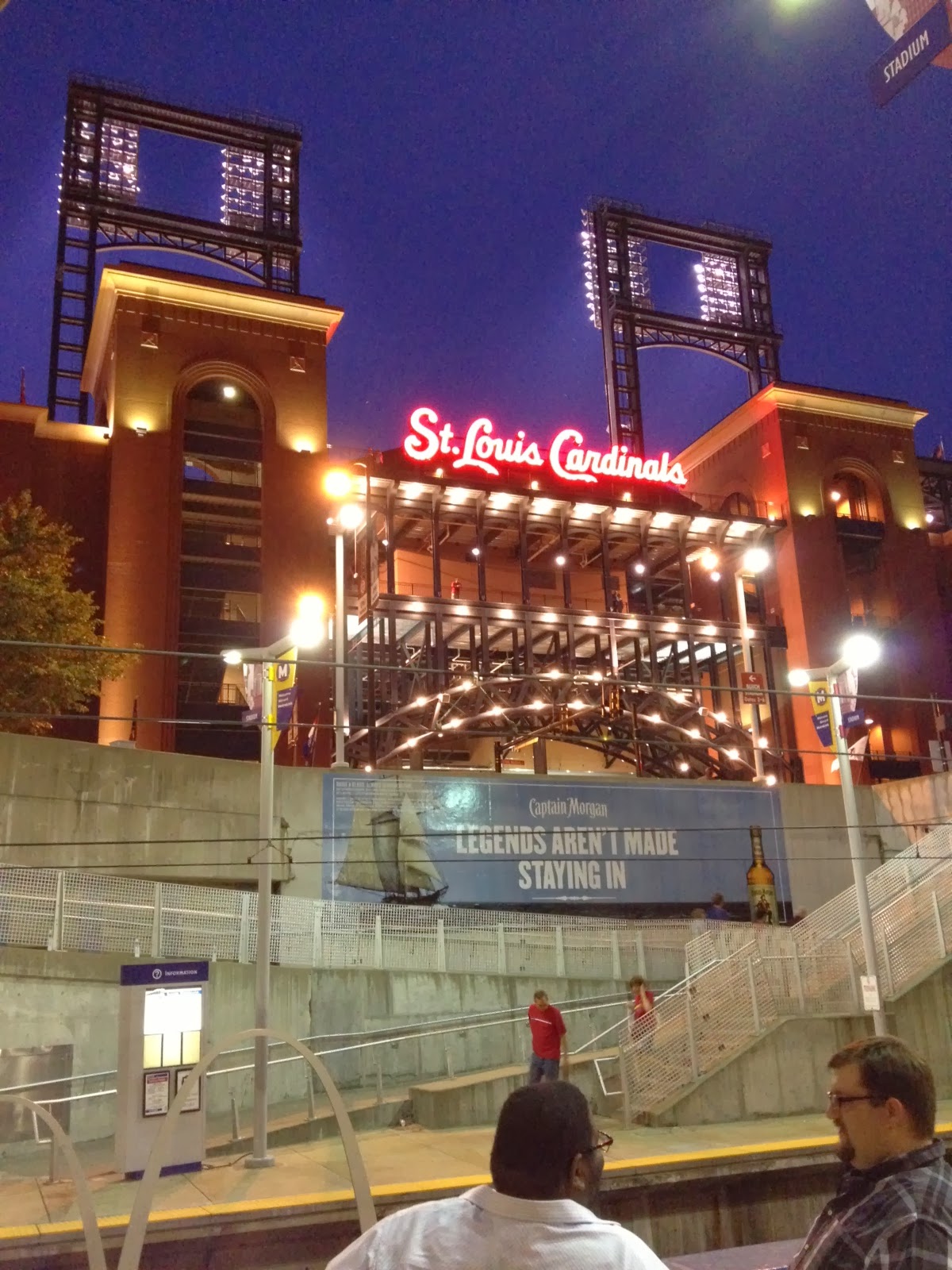 As we climb the steps from the platform, Busch Stadium’s third base gate, and more importantly, a statue of Stan Musial come into view. We secure our tickets, but have other priorities before game time.

As we stroll the street toward left field, a security guard on a golf cart stops to chat. The friendly guard confides that he prefers “old Busch” to the new facility.

I was still surprised after he presented his reasons, but of course, I’d never been to either one. I wasn’t about to allow his opinion to influence my first impression.

After he wished us a fun evening, we continued on our way to Mike Shannon’s Steaks and Seafood. Rather than an upscale dinner, we were mostly interested in the memorabilia, which is everywhere.

Mitch and I each sip one AmberBock draft before we head back toward the ballpark. On the block in between, we’re greeted by a street vendor preparing cheesesteaks and a large outdoor room in which to enjoy them. We take our seats to partake while watching baseball highlights on one of several flat screens adorning the walls.

Now comes time to enter the “new Busch” along with nearly 44,000 others. Not a bad turnstile evening for a Thursday in early June.

Mitch and I adhere to our usual exploration. Below us, two 1st place teams, the D-Backs and Cards, each cross the plate twice in the 1st inning.

It doesn’t get any better for Matt Reynolds in the 5th. He surrenders another pair of long balls so the D-Backs’ late surge only gets them within 4. Starting and winning pitcher, Shelby Miller, even registers a dinger.

The early laugher gives us an opportunity to check out the stadium even more closely. A kids’ play area in right center’s family section is enormous. A party bar occupies the area above the batter’s eye.

The openness in left is by design to allow a game view for “rooftop grandstands” across the street. This is on the property of the former Busch and is currently under construction to include shops and restaurants.

In fact, as we exit an outfield gate, we discover the “former Busch” foul line marked across the sidewalk and onto the wall of the new park. A plaque tells the story. Very cool!

Maybe it’s because of how Mitch and I enjoy exploring new parks; maybe it’s due in part to the open left field; we find that this stadium seems to impede your progress as you attempt to travel up and down levels. More than once we attempt to shift from one level to another, but only discover escalators going up when we want to go down and vice versa.

At one point, we find only flights of stairs that lead us down to a dead end. An usher is stationed there to assist weary explorers like ourselves. Again, maybe this isn’t an issue for 44,000 others, but the other MLB parks we visited this week were much easier to navigate. That could be what the security guard had alleged this afternoon. 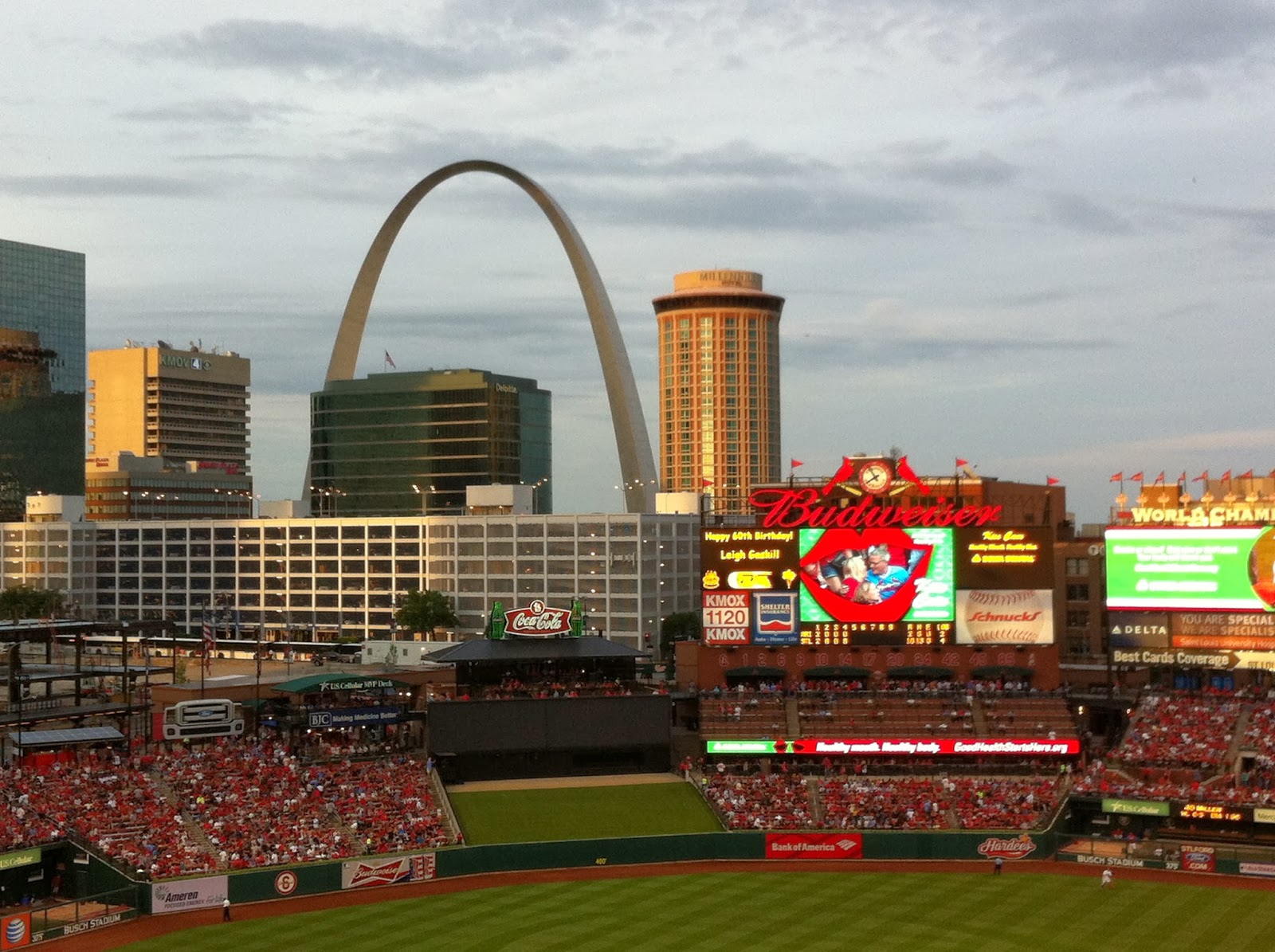 It certainly is a picturesque view as my late afternoon iPhone pic (above), taken from an upper deck, can attest. Here’s another instance, such as PNC Park in Pittsburgh, where it seems the city was painted around the stadium.

After snapping photos for other visitors next to the “Stan the Man” statue, we descend the stairs to board the next train. The brief ride followed by a short walk take us back to Tom’s, where we belly up to the bar for some local craft brews and baseball highlights.

As we continue our stroll toward our hotel, we pick up sandwiches for a late bite. The hotel features a patio where we enjoy our late night snack in the cool night air.
Brian Williams
From Deep Short