My list of ballparks is somewhat extensive for a few reasons: my broadcasting career netted me occasional press seats; my recent medical software marketing position required travel with many evenings free; and, one of my best friends (whom I met while we were playing baseball) planned annual baseball vacations for us for nearly ten years. I’m hoping he and I can resurrect that tradition soon.

Philadelphia – The Vet (My parents surprised me on my birthday in May with scheduled doubleheader tickets against the Expos. I remember the man sitting in front of us smoking a cigar.) I returned many times. In fact, before our daughter was born, my wife and I enjoyed a weekend ticket plan. We’d fill in the gaps using my press credentials.

When I was even younger, I saw one Sunday game against the Giants at Connie Mack Stadium on a bus trip with relatives.

And, Citizens Bank Park. Much more fan friendly than The Vet.

Baltimore – Memorial Stadium. I recall attending a Monday Night Baseball telecast game where the A’s wore their yellow and green uniforms and the Orioles wore their orange tops.

And, Camden Yards – one of my favorite ballparks. It’s still a fun destination and as close to my home as Philly, without the horrendous traffic.

Washington, DC – Nationals Park is fun with lots of good food options. I recommend taking a bus trip or take the train to a day game. Trains only run until 11 PM, so you may have to miss an exciting ending or get stranded.
And RFK, the Nats’ home before the new park was ready.

Pittsburgh – PNC Park is my current favorite. There’s something very special about the rivers, the Clemente Bridge and the cityscape surrounding this gem.

New York – Yankee Stadium (the former), Shea Stadium and Citi Field. My wife and I enjoyed a burger and a beer across the street from Yankee Stadium. We also saw an Old Timers’ Game there.

Boston – Fenway Park. There’s nothing like it or Yawkey Way and the surrounding pubs before a Sox game.

Toronto – I only saw one game at Rogers Centre, but I experienced both the roof on and off! About the 4th inning during a lazy, rainy Sunday afternoon game, I suddenly saw sunshine and shadows on the field. I couldn’t even hear the roof opening to a much brighter day.

Detroit – Comerica Park. There’s even a brick near the Tiger at the entrance with my name on it … in the players’ section, (except I’m not the former major leaguer, Brian Williams) I still got a photo of myself with that brick! Sadly, during that same trip, I visited the remains of Tiger Stadium and actually witnessed a wrecking ball crashing into the press box. I was surprised how close I could get. I still have a small piece of concrete from the site.

Cleveland – I still really like The Jake. It’s the only stadium where I paid for the standard tour. I especially enjoyed standing on the field, sitting in the Indians’ dugout and seeing the broadcast booths. My friend and I would stay at the Holiday Inn Express two blocks away. It was converted from an old bank and still operated the narrow elevators. Rooms featured spacious wood floors, heavy doors and ten-foot ceilings. Large windows provided a view into the outfield seating at the ballpark.

Cincinnati – Great American Ballpark surprised me. The river behind the park with passing riverboats sets off a fine baseball atmosphere.

Chicago – Wrigley Field. ‘Nuff said. Be sure to visit nearby pubs pre-game (and post-game before getting back on your train).

And Southside. The train takes you right there, too. And the original stadium’s home plate is marked in the parking lot. I saw the Yankees there.

Milwaukee – Miller Park, with the roof closed on a stifling Sunday afternoon. Fortunately, we visited a handy brew pub after the game before returning to our Chicago hotel. I also bought my daughter an Alcides Escobar shirt before he was cool. On a baseball vacation, my friend discovered we could hit Wrigley on Saturday, Miller Park on Sunday and the White Sox Monday. I love having friends who are as passionate about baseball as I am.

Minnesota – This is another well-designed ballpark. Although today’s hitters make even this park look small, it’s cavernous and beautiful.

Kansas City – I never realized how close you could get to those fountains in right field at Royals Stadium! Definitely leave time in your itinerary for the Negro Leagues Baseball Museum and Buck O’Neil’s and Satchel Page’s grave sites. And don’t forget to sample authentic KC barbecue.

St. Louis – The latest iteration of Busch leaves a perfect view of The Arch beyond the outfield. For some reason, I had difficulty navigating the place. (Honest, I only had one beer at Mike Shannon’s.) Maybe it still required some finishing touches, but I ran into a couple of dead ends at the bottom of stairwells. The shops/restaurants beyond left field weren’t built yet in 2013. I like that they marked the base line of the former Busch along the third base side outside the current park.

Los Angeles – Dodger Stadium may be old, but it’s fun. (Yes, I had a Dodger Dog.) Unlike some of the locals, I stayed for the entire game and witnessed an inside-the-park homer.

San Francisco – Candlestick Park. I’m showing my age, but I saw a Dodgers’ game here. I got sunburned in my seat, yet was freezing in the stiff winds on the concourse.
I’d love to see a game at the new park, which looks amazing.

I’ve been fortunate enough to eye-witness two no-hitters: Roy Halladay against the Reds in the playoffs at CBP; and, Jordan Zimmermann wrapping up the regular season at Nationals Park when Steven Souza, Jr. made the game-ending, diving grab in left center field.

I think that leaves a dozen current parks that I haven’t visited. My bucket list includes some Arizona Fall League action and the Midnight Sun Game in Fairbanks, Alaska.

Only because a current colleague asked, I compiled a list of 32 minor league parks (including affiliated and independent) where I’ve seen at least one game. I guess that gives me more writing material.

“How do you pronounce ‘Tomah,’ Wisconsin?” Mitch asks the woman at the hotel’s front desk. “TOE’-mah” comes the reply. “Hell, if you live here.”

Seems quaint and peaceful enough to house the tripsters for the first night of UBT; plus, we always enjoy a fine sense of humor. Besides, Tomah — with its forests, farms and wooden lodges — gives us a jump on getting to Minneapolis when the gates open at Target Field. Sunday, June 2, features a 1:10 start to wrap up the Mariners series.

It isn’t that we’re any more eager to see a new Major League ballpark. It’s just that there’s more square footage to explore than in the more intimate venues.

We arrive soon after the gates open, but do we enter? Not on UBT. We take a stroll around the outside of the ballpark, which unveils several treasures: banners of many key Twins players over the years hang neatly on a fence toward a construction site; statues of the most highly regarded Twins dot the landscape at various gates; and, families are everywhere. 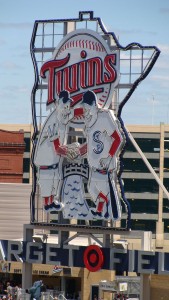 Today’s giveaway? A Josh Willingham jersey for the youngsters. We see lots of cute young fans, from infants to Little Leaguers, donning them throughout our stay.

And, it’s good they have that extra layer. A stiff breeze accompanies the bright sunshine all day.

Our seats are second deck in the shade in right field. Folks are wrapped in blankets.

After an inning or two, Mitch and I begin our trek around the inside of this fairly new park. It reminds me somewhat of Nationals Park, but is less conventional. 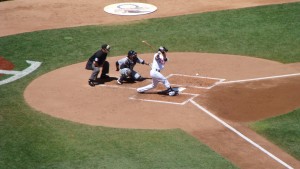 One can enjoy the action all around the park on both levels as there’s plenty of room behind the seating. That’s our mission the remainder of the game. Areas in the sun feel most comfortable. 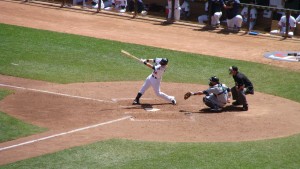 I’m not sure if the wind assisted, but the home team launches four bombs to back Scott Diamond in a 10-0 shellacking. Mitch and I don’t believe the wind is a factor for any of them.

As the game winds down, we’re in center field, where a friendly usherette directs us to get our “First Time at Target Field” certificates. A pleasant couple asks about our trip. They notice our next destination, their home town.