Getting on the road in St. Louis, we take a slight detour to grab a sandwich at a place recommended to us by a friend of Mitch. As we roll by shortly after 11 AM, there’s a line out the door of the small city establishment. The line continues around the corner!

The sandwiches must be as advertised, but we decide to forego the delay considering we have 240+ miles to travel before tonight’s game. The line of hungry patrons also reminds me of something my Dad’s been saying since I was a youngster: “I stood in enough lines in the army.”

We agree to catch a bite along the way when we stop for fuel. This must have been a day of reflection for me, because this seemingly small decision triggers another thought. Not just today, not just on this week’s massive UBT undertaking, but Mitch and I always seem to agree with plans … even when they don’t always go according to plan.

Having the same passion for baseball, craft/micro-brews and a variety of food plays a part, I’m sure. Plus, both of us consider ourselves fortunate (extremely understanding spouses, enough vacation time, etc.) to take trips like this, so we never sweat the small stuff.

We cross through Illinois. Shortly after we’re in Indiana, it’s time for a fuel stop — both for the truck and for us. We eat on the go, because we still need to get to Indianapolis, check in to our hotel, and experience tonight’s first pitch. 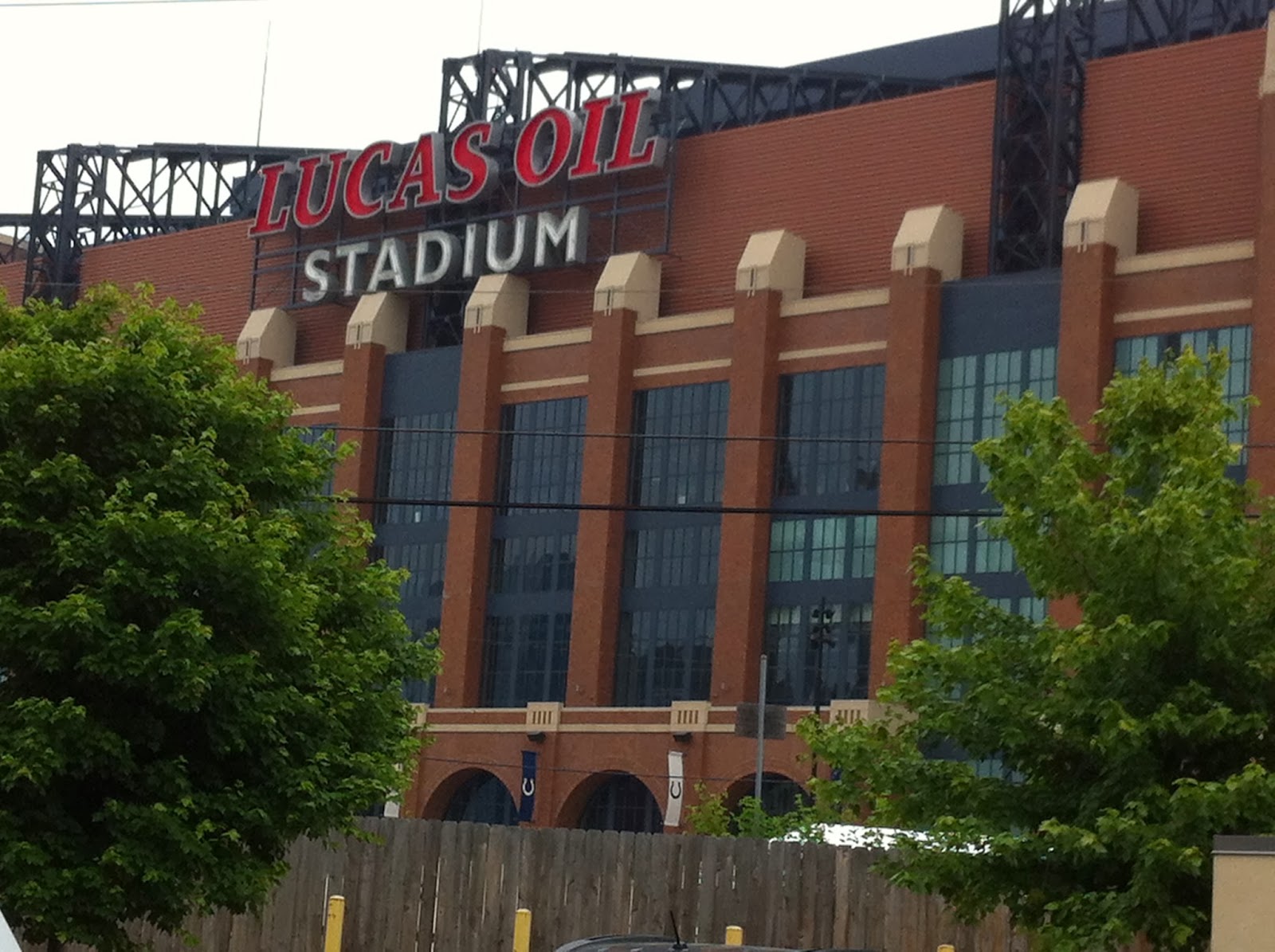 Our hotel is literally in the shadow of a huge domed building. Football fans may understand the use for this place (above). Our focus is on checking in, dropping off our bags, and walking to Victory Field.

Our walk takes us by a huge coal-fired power plant, which contrasts the clean, new look of Lucas Oil Stadium, but looms nearly as large. At the end of the block rests Victory Field. 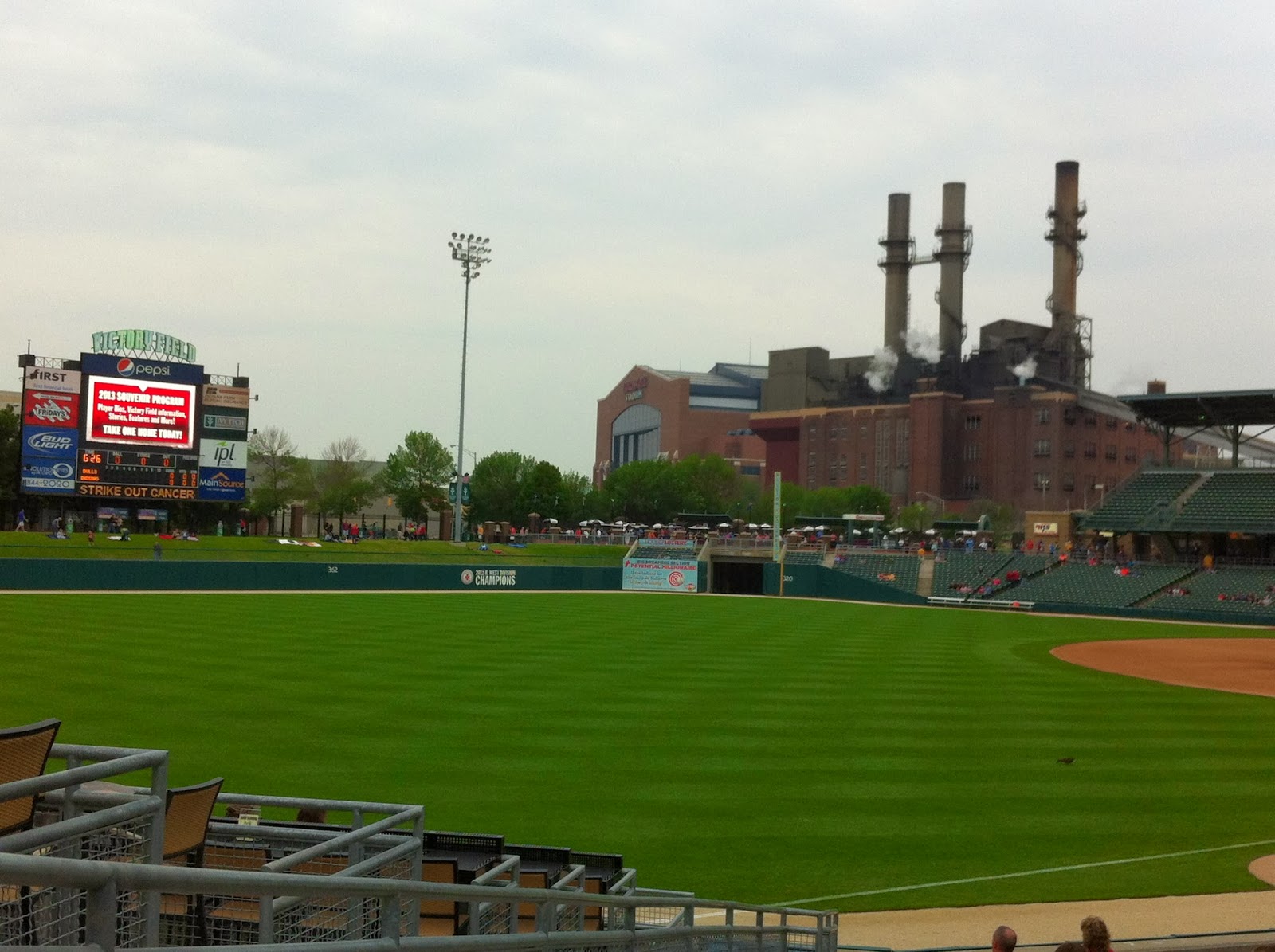 The outfield gate at the corner of West and Maryland looks inviting, featuring brick and an iron gate to match its surroundings. The sidewalk is brick as you approach the entrance.

Just inside, an outfield concourse welcomes ticket holders with concessions and games. A spacious grass bank circling the outfield offers relaxing views of the action.

Families already begin to spread blankets in anticipation of Friday night baseball. Behind the banks and walkway is another roomy, tree-shaded area for children to play, safe from the action.

Mitch and I find craft beverages and an engaging usher on the concourse behind the Indians dugout. We also chat with a local businessman who enjoys the proximity of professional football and baseball with his son.

The concourse displays banners depicting players who’ve graced the current and former Victory Field. This modern version opened in 1996 yet rivals newer parks in many ways.

Former Royals farmhand, Mike Montgomery, takes the ball for the Durham Bulls. Another former Royals prospect plays right field. See how close you could be to Wil Myers? 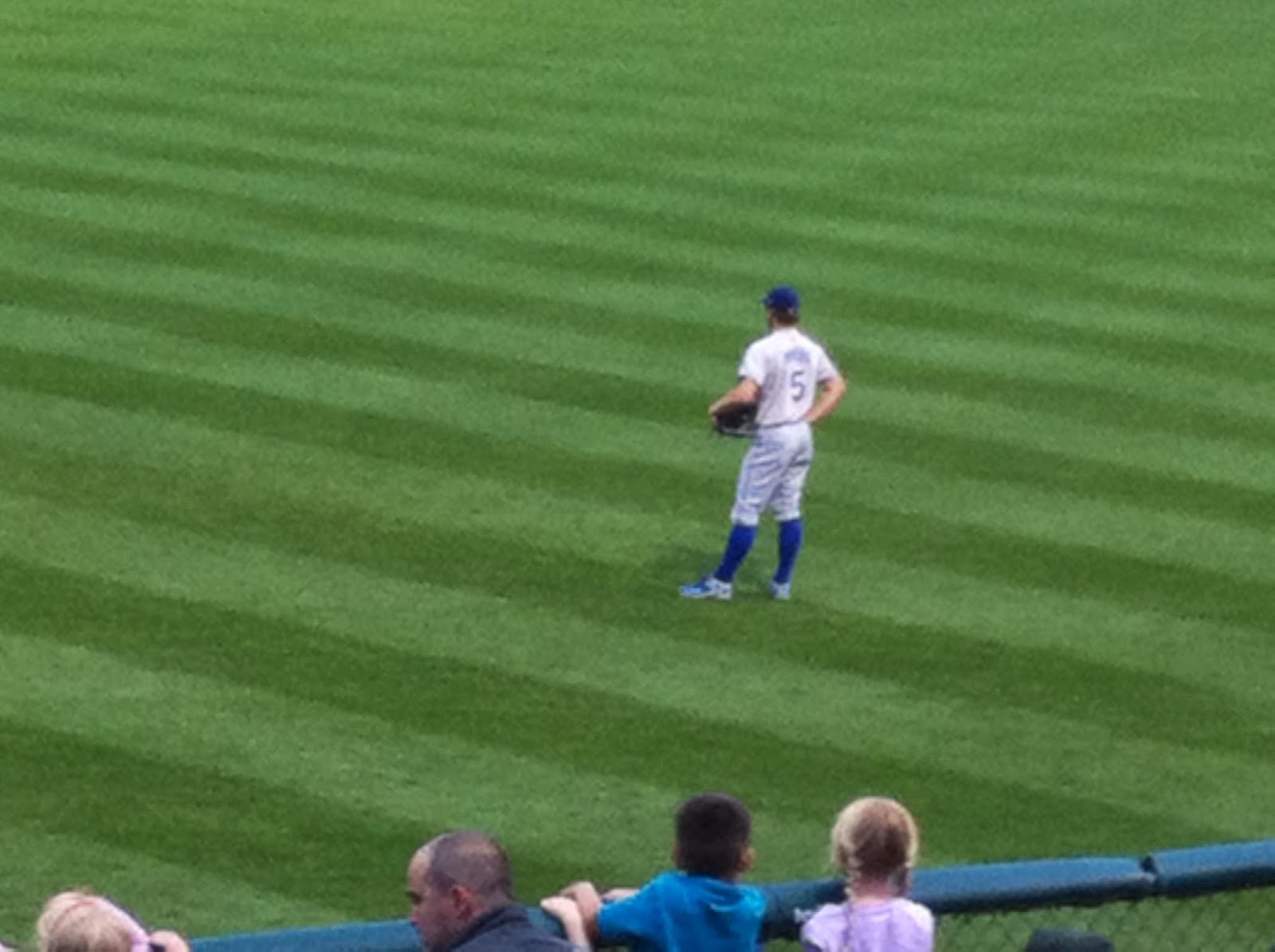 Montgomery steals the show, hurling 7+ innings of no-hit ball. Leslie Anderson and Shelley Duncan provide long ball support and a 4-0 lead, but four walks force Montgomery to the side after reaching his pitch count.

The pen and defense immediately unravel as the home team records a 6-spot in the 8th. Tony Sanchez ropes a clutch RBI double in that big inning.

This game represents the most baseball drama we’ve witnessed since Omaha. The Pirates AAA team hangs on to win, 6-5, sending nearly 14,000 fans home happy. On the other hand, Mitch and I strike out in search of food and beers.

We stroll past a couple of high-class places, one of which spills out onto the sidewalk. On the same block we enter the local Rockbottom. A late dinner, some Red Ales and IPAs, more baseball highlights, and a leisurely walk back to the hotel cap off another perfect UBT evening.
Brian Williams
From Deep Short